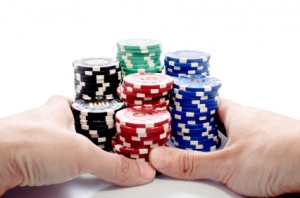 A hallmark of any skilled poker player is the ability to recognize situations where they can force opponents into making a mistake.

Something I strongly emphasize to my students is that…

EVERYTIME you notice an opponent take a line or action that consistently makes you uncomfortable, you want to incorporate it into your game, and use it against your opponents as well. If it’s tilting you, then it most certainly will tilt other players as well.

One tactic that fulfills this role is check-raising on later streets.

The purpose of this article is to show you the benefits of check-raising the turn by first going over some theory, and then showing you how it applies to in-game situations. Now, before we jump into the hand histories, let’s do a quick review of some turn theory to make sure we’re on the same page.

Check-raising the turn is one of the most powerful moves in PLO, especially as you move up into the more aggressive mid and high stakes games.

1. Perceived Strength. In most cases, players ranges typically narrow as the hand progresses, and what I mean is that players peel the flop with much wider ranges than they’re willing to peel with on the turn. As a result, bets (and particularly check-raises) made on later streets get much more respect than on the flop, which ultimately results in more fold equity. I don’t pretend to be any sort of expert Stud player, but a basic strategy I’ve learned is that if you don’t improve your hand by fifth street, then you’re supposed to pitch it into the muck. I like to use this analogy to explain how many players approach playing the flop in PLO as well. Because of the presence of backdoor draws and floating opportunities, there are TWO INCENTIVES for the player in position to peel the flop with a very wide range:

These are effective strategies that you want to incorporate into your game as well, but if you know your opponents are doing this, then we can use this knowledge to our advantage by understanding a very simple equation that I learned from my good friend Andrew Seidman.

The most profitable check-raising opportunities on the turn occur when you’re up against wide peeling ranges, your opponents will bet the turn (aggressive floaters), and you have some pot equity to add to our fold equity.

2. Buy a Free Card. This also applies to check-raising the flop, but one of the main benefits of check-raising is that it forces opponents to adjust by checking back more often. The main benefit is that it allows us to realize your equity OOP. Simply put, the threat of a check/raise is almost as powerful as the check-raise itself. One of the advantages of having position is being able to check back and realize your equity on later streets, while also having the ability to fire at the pot and prevent the OOP player from realizing his equity.

What I’m saying is that the threat of check-raising works like a double-edged sword. If your opponent bets, they have to be concerned about getting check-raised off of their hand. Yet if they elect to check instead, they’re letting us take a free card and improve to a winner on the river. Plus, we get the added benefit of repping a value range on the river (either by leading for “value”, or check-raising as either a bluff or for value), because most players lean towards betting their value range on the turn to protect (and to build a pot), which means that if they check back the turn in position, it’s difficult for them to tell a convincing story on the river.

Now, let me walk you through a few real hand histories here so you can see how these situations really play out.

Relevant reads: No relevant reads on the first hand, other than Villain’s less than 100bb buy-in amount.

NOTE: I picked this hand because it highlights one of the most common trouble spots for beginning players, being OOP on the turn when the draw completes after c-betting the flop.

All of the actions leading up to the turn are very standard, but the turn is where the interesting decision in the hand is made. The 5s obviously isn’t the best card for us because it completes the most likely straight draw, but that doesn’t necessarily mean we should give up on the hand quite yet. We already know that Villain is likely a weaker player (smaller buy-in amount), which means that he’s probably peeling the flop wider than the average player at these stakes. Plus, he only bet half pot, which generally represents a weaker/wider range than larger bets as well.

So why is check-raising better than calling?

After all, he’s giving us 3:1 on our money, so shouldn’t we just call and see if we get there on the river and then take it from there?

Our ~30% equity against his range, combined with the fact that he’s likely a weaker player means that putting in the money now, as opposed to calling and leaving us in awkward spots both when we miss, AND when we get there on the river means that check-raising is a much better option.

And besides, what hands besides 87** could he really bet-call against us anyway? He may even fold a non-nut straight, and would almost certainly fold a weak two pair. Plus, running into 87** should be discounted because most unknowns generally don’t bet half pot for the purpose of inducing a light check-raise without any history.

On the flop I think leading is the best option.

Everyone folding is fine since we only have a flushdraw with backdoor straight draws, and there aren’t very many made hands that can put in a raise against us. Leading also gives us the ability to represent the widest range of hands, as well as leaving us with a bigger pot to value bet into for the times we get there.

But similar to last hand, the most important decision point comes on the turn. Earlier I mentioned that something to understand about PLO is that players typically peel the flop much wider than on the turn, particularly when they’re in position. But something I didn’t talk too much about that I’d like to bring up now, is the importance of paying attention to which draw completed on the turn. What I mean is that it’s not enough to simply say “the draw got there on the turn”, because obviously the number of straight and flush draws varies greatly between board textures. In this hand for example, the 9c only completes one straight (8T**), but on a J9x board, the T would complete many different straight draws.

So given that he’s likely to bet with a much wider range than just the straight, check-raising is a much better option than check-calling, check-folding, or barreling. If we barrel, sometimes he’ll fold, but check/raising yields more EV because of the extra dead money we pick up for the times he bet/folds the turn. Plus, it’s not a big deal if he checks back anyway, because we can still value bet the best hand on the river when we get there, or we can lead as a bluff if we feel the urge. And just like the last hand, even if he shows up with the straight, or decides to hero call us with a set or two pair, we still have ~25% equity against that range.

One last thing to mention is that similar to the last hand, the fact that he only bet half pot leaves a big hint to the strength of his hand. At the lower stakes, almost all players tend to bet bigger when they have strong hands, because they want to protect against the multitude of draws that are available in PLO. So if you see weak bets from players (particularly on boards where flushes and straight draws are possible), it’s much more likely that they’re betting with the intention of folding to a raise, rather than betting to induce a bluff-raise.

I included this hand to reinforce a few of the items we touched on last hand, but this time facing a different opponent. Both of the preflop and flop actions are standard. Now, here’s another situation where most competent players will try to represent whatever draw got there on the turn after they peeled in position. But again, it’s very important to look at which draws got there, and how it fits into their preflop and flop peeling ranges. For example, the 6c completed two gutshots, one of which is the 35** gutter, which is discounted from his preflop calling range.

I’m not going to repeat everything that was covered in the previous hand, but against this opponent, notice how much better c/r’ing is than barreling the turn. If we barrel the turn, he can bluff raise us off the best hand, or he can float us on the turn again, and put us in a very difficult spot on almost any river card lower than a J that doesn’t pair the board. My read was that he would stab the turn with basically 100% of his flop peeling range, which is much wider than 85** and 35**.

Also, it’s important to point out that against unknowns or passive players, it’s better to just bet/fold this instead of check/raise, because too often they’ll check back and realize their equity. But if you have some information like I did here, check-raising and taking away his positional advantage by putting the money in fast OOP is the better option.