How To Maximize Your Value on The River 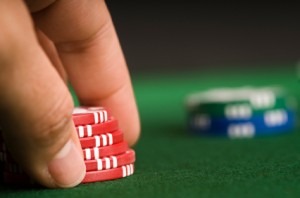 In case you’ve been misinformed, I want to remind you that the majority of your money is NOT won from trapping players on the river.

As I thoroughly establish in the PLO QuickPro Elite lessons, players typically play more straightforwardly on the river than they should.

This means that instead of check/calling, you must take it upon yourself to bet for value in order to prevent your opponents from checking back with hands that are worse than yours.

On the river, there are few mistakes more costly than letting an opponent check back with a hand they would’ve called a bet with.

In value-betting scenarios, this is clearly the situation we want to avoid this most. I’m not going to spend a ton of time talking about how to value-bet when you have the stones because I think it’s easy enough for you to learn on your own, so instead lets focus on what you need to consider when value-betting thinly.

The first thing you need to understand is that how often an opponent gets to showdown is directly correlated with how thinly you can value-bet. Against tighter players, the goal is to polarize your range, and to give you an explanation for why this is a good strategy, let’s quickly review a couple of concepts that we discuss during the lessons. In the PLO QuickPro Programs, we established that your preflop hand determines how much postflop equity you have.

This concept carries through all the way to the river.

When nittier players get to showdown…you can count on them having the nuts or something close to it much more often than the looser players. Even though they don’t have very high went-to-show-down (WTSD) percentages, their won-money-at-show-down (W$SD) percentages are typically very high. That’s because tighter players have more suited Aces, nut straight draws, and better two pair combinations than the looser players do.

This is why the most common value-owning situations I’ve experienced personally and seen from my students occur when they’re value-betting too thinly against nits.

…put more simply, if you’re betting or raising into a nit, your reason for doing so should be:

On the other hand, the players we do want to value-bet thinly are the looser players who have high WTSD percentages or low W$SD.

Against weaker players, or really just anyone that’s playing too loosely…

…the goal is to punish them for playing too many hands.

The purpose of these concepts is for you to use them as a guideline, not as a law. Paying attention to how often people are going to show-down will give you a good idea of their hand strength, but it’s also important to keep in mind the board texture and the dynamic you have with your opponent.