Learn Why, “If You Never Get Caught Bluffing You Are Not Bluffing Enough” And The Three Keys To Triple Barreling Profitably 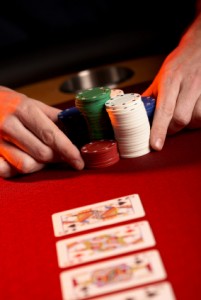 In PLO QuickPro Elite, we talk extensively about the elements that constitute a profitable double-barreling situation.

Triple-barreling and double-barreling share a couple of similar characteristics, but they’re different enough to make spending some time on each one individually necessary.

Now, there’s three KEY considerations you have to make when pondering a triple barrel.

1. The Tendencies of Your Opponents (the most Important of all).
Typically, it’s a bad idea to empty the clip against calling stations that won’t fold two pair on a monotone board, but this shouldn’t surprise you because it’s something I’ve covered in great depth through out The PLO QuickPro Programs.

2. Whether or not Your opponent’s range of hands matches up with the action so far.

“What hands can’t he have?”

“What hands does he always play this way?”

…you could even go more specific and ask “How would he play a set on this board?”

“What kind of hands peel here?”

Also, simply thinking in terms of the amount of hand combinations that beat you can provide clues to how profitable it is to bluff-catch your opponents.

3. How your opponent’s range interacts with the board texture.

Not only is it important to be aware of the nuts by the river, but how the board texture developed throughout the hand greatly impacts our ability to exploit our opponents.

***”If You Never Get Caught Bluffing, Then You Aren’t Bluffing Enough” (Tweet This)

Last, and perhaps most importantly, something I want you to remember if you’re considering firing three barrels into the pot, is that if you never get caught bluffing, then you probably aren’t bluffing enough.

I’ve had several students that had a lot of trouble firing the third barrel, and it absolutely destroyed their Non-Show-Down Winnings, as well as their win rate.

Like I’ve said before, building up big pots only to give up on them later will absolutely destroy your win rate, and your confidence as well. There’s nothing worse than wimping out on a triple barrel, only to see your opponents show down a weak one pair hand that would’ve unquestionably folded their hand if you even lip-synced the word bet.

In the previous section, I explained that most players don’t bluff the river nearly as often as they should. If you ask me, I don’t think they’re hesitant to fire a third barrel because they’re scared or anything, I think it’s more so due to the fact that they simply don’t know how often their barrel has to work to be profitable.

This is why I decided to provide you with a small table that displays just how often your opponents have to fold for your last bet to turn a profit.

This is actually just the top row of the table that’s found on the second-to-last page of PLO QuickStats (The Complete Package of PLO Math that comes as a bonus when you invest in one of the PLO QuickPro Programs).

In the very left column, you see that your equity is appropriately stated as being 0%, but the main variables to look at here are the bet size in terms of the percentage of the pot, and the required fold frequency that’s necessary for yielding a profitable bluff. For example, if we bluff a full pot-sized bet on the river, our opponent needs to fold half of the time to show a profit. Likewise, if we bet 50% of the pot, then it only has to work 1/3 of the time to be profitable.

Do yourself a favor and memorize this table, and then before you decide to fire another bet, simply ask yourself if you think betting will work often enough to be profitable.

For example, ask yourself, “If I bet full pot here, will he fold half of the time?” If not, then giving up is likely the best option.

To answer this question, you need to know how much fold equity we have, so analyzing how the river card hits your opponent’s and your perceived ranges is key.